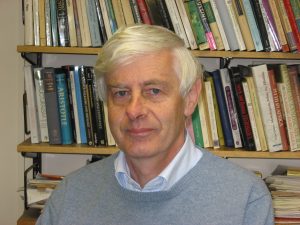 Richard Buxton is a classical scholar specialising in the study of ancient Greek mythology and literature.  Born in Mansfield, England, he went to school in Nottingham, and to university as an undergraduate and graduate student at King’s College, Cambridge.  After taking his doctorate at King’s (having researched for a period also in Paris), he moved to the University of Bristol, first as Lecturer and subsequently as Professor of Greek Language and Literature.  Now Emeritus Professor, he continues actively to research, write and broadcast.

Richard is committed to bringing knowledge about and enthusiasm for classical antiquity, especially its mythology, to as wide an audience as possible.  His work has appeared in fourteen languages. In all his writings, but especially in Imaginary Greece – translated into five languages – and in the best-selling The Complete World of Greek Mythology – translated into eleven languages – he aims, not to ‘dumb down’ the ancient stories, but, by using accessible and jargon-free language, to bring home to modern readers the creative power and imaginative influence of ancient myths.