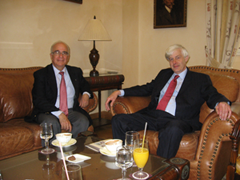 In Athens, with Vassilis Lambrinoudakis, archaeologist and former President of the LIMC Foundation

In 2003 Richard Buxton joined the editorial team of the iconographical lexicon LIMC (Lexicon Iconographicum Mythologiae Classicae) and its religion-oriented successor ThesCRA (Thesaurus Cultus et Rituum Antiquorum), based in Basel but with editorial representation from throughout Europe and from the United States. The Scientific Committee which oversees the Foundation is drawn from over thirty countries worldwide.

In 2006 he was elected President of the LIMC Foundation, a post which he held until 2012. 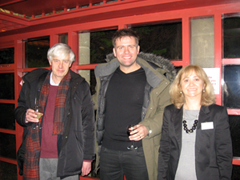 After the Bristol ‘What’s in a Variant?’ conference, with actor Sam Callis, and mythologist and novelist Mercedes Aguirre

In 1996 Richard was sole organiser of an international colloquium at Bristol (Myth into Logos?), attended by 150 scholars from several continents. This started a tradition of ‘myth conferences’ at the University of Bristol, which still continues.

In 2010 he organised another myth-conference at Bristol about Greek and Roman mythology: What’s in a Variant?